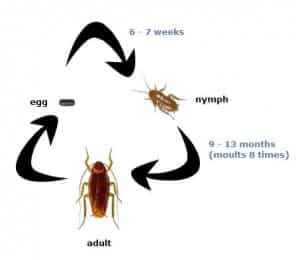 Cockroaches are omnivorous. In addition to conventional foodstuffs, they will feed on a wide range of organic matter including other cockroaches. Their activity peaks during hours of darkness.

They exhibit incomplete metamorphosis; the juvenile stages or nymphs resemble the adults. Each cockroach moults several times in its life cycle producing a larger nymph and eventually moulting to the adult stage. Some species are fully winged in the adults, others may have reduced wings or wing buds. When wings are present, they are leathery and veined.

The females of those cockroaches classed as pests all produce egg cases or oothecae, which contain eggs, which hatch inside the case from which nymphal cockroaches emerge. During the daytime, cockroaches spend most of their time in harbourages grouped together.

This behaviour is influenced by them finding the same suitable harbourage. They also produce an aggregation pheromone, which is a chemical messenger to other cockroaches of the same species, who respond by being attracted to the source of the pheromone.

As this pheromone is present in cockroach faeces, cockroaches will also be attracted to areas previously contaminated by cockroaches. The development of cockroaches is affected by food quality, humidity, temperature, and day length.

Cockroaches foul their environment with faeces, regurgitated food and they taint materials with their characteristic smell. The air in infested premises may contain fragments of their exoskeletons and cockroach excrement. Cockroaches also contaminate food directly as they move from filth to food indiscriminately and are therefore implicated in the mechanical transmission of many pathogens, such as those causing food poisoning and wound infections.